Were Scars from Smallpox Vaccinations………

At the turn of the 20th century, the United States was in the grip of a full-blown smallpox epidemic. During the five-year outbreak from 1899 to 1904, government health officials confirmed 164,283 cases of smallpox, but the real numbers may have been five times as high.

To slow the spread of the highly infectious and often deadly virus, there was a nationwide push for smallpox vaccination. In cities and states with the worst outbreaks, vaccination was compulsory and official certificates of vaccination were required to go to work, attend public school, ride trains or even go to the theater. 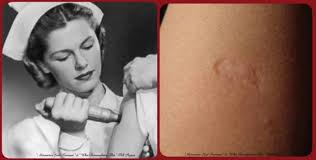